Sri Lanka could be earning more revenue from tea tourism than tea exports by the year 2027. This is one scenario projected for Ceylon Tea in The Future of Tea released by Forum for the Future. The Tea 2030 project has four possible scenarios based on 10 major trends that the industry would face. Reading this drove home the reality of gathering winds of change as my son Sajeev begins to row his own course in the world of tea. The 4th. generation from the family in tea, I’m certain our 78 year pedigree and rowing skills will  steady his course.

The first five are themes familiar to  Sri Lankan plantations especially climate change which has recently caused weak monsoons. Sri Lanka has a better record of wages and labour welfare than many of the larger tea producing nations. The last four, namely supply chain, business models, sustainability and consumer attitudes also challenge brands such as HYSON as we struggle to grow against fiercely competitive multi nationals with their close ties to mass market retailers.

The trends and scenarios are set against a backdrop of global tea consumption increasing by 60% between 1993 and 2010 and the industry being a vital source of employment and export earnings in developing and emerging economies.

Forum for the Future believe the report should stimulate producers, exporters, retailers and policymakers to explore the future to lift the humble cup of tea to a ‘Hero’ crop which is more than just a commodity.

Strong growth in tea sales due to repositioning of tea industry, attracting younger consumers. In this scenario tea consumption is driven by single serve tea capsules, soft drink multinationals,, a futures market pioneered in India and pharmaceutical certification. Production has been driven by extensive deforestation, mainly in Kenya, and mechanization which has reached 50% globally, but is 75% in Sri Lanka, Vietnam and Indonesia.

2.Storm in a tea cup – Tea industry is a shadow of its former self due to lack of investment in new varieties to cope with extreme weather, pests and diseases.

In this scenario tea estates are closing due to high energy costs and water shortages. Domestic consumption has led to export bans in India & China which is selling more tea bags than leaf. Shortages and high prices have spurred tea growing in Europe & North America. Tea extracts make up 30% of the industry and tea sales are dominated by soft drink brands.

3. Green leaf – all products, including tea, must demonstrate their sustainability credentials to consumers who are demanding high standards.

4. Re-brewed – a world of shortages and efficiency. Pressure on land availability has led to shift of tea growing to new countries such as Myanmar and Congo.

Thrifty consumers are re-brewing leaf. Sri Lanka’s tea sector has shrunk by 70% and its main export markets are China and the Far East. India becomes a net importer of tea.

Down load the Future of Tea report here

Young generation on an estate 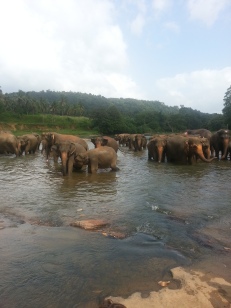 Bath time for elephants at Pinnawela
Follow The Catch Point on WordPress.com

The World is a Tea Party

Mutterings of a Tea Merchant